Which lens to buy first?

I bought my first camera, but I don’t know which lens to choose. With so many different options, how do I choose? The answer to the question of which lens to buy first is surprisingly simple.

The best first lens for a beginner to buy is the camera kit lens. For many entry-level cameras, this lens will be 18-55mm. With its moderate zoom range and affordable price, this is by far the most versatile kit lens for beginners.

As you progress, you will want to expand your equipment beyond the kit lens. Use this guide to help you decide which lens to purchase first.

There are many lenses that are considered “good” for beginners, but that does not necessarily mean they are the perfect fit for you. Before deciding which lens is best for you, first consider what kind of photography you are interested in.

If you are a complete beginner, you may have no idea what kind of pictures you want to take. You want to photograph everything and see where you stand. This is how many people, myself included, start out: getting an idea of different genres before sticking to one.

The philosophy I like to use when considering beginner goals is which ones are the most versatile. Especially if you are an amateur, you want to have one lens that can capture everything.

What is the most cost-effective while still being able to take the pictures that you have in mind? Let’s take a look at some lens suggestions.

Prices and images pulled from the Amazon Product Advertising API on:

What to know before buying  the Best Lenses For Beginners

Focal length, shutter speed, wide-angle… The field of photographic lenses has its own lexicon. To choose your lens without drowning in technical data, do a little clarification. First, you need to be familiar with the key terms.

It tells you the zoom capacity of your camera in millimeters (the distance between the optical center of the lens and the focal point).

For example, 18-55mm indicates that the camera can zoom to a maximum focal length of 55mm.

It designates the opening capacity of the diaphragm of your camera, adjustable according to the quantity of light desired.

Body type available on the SLR market. These cameras have a smaller sensor than full-frame cameras and are often less expensive. If your DSLR belongs to this category, make sure that the lens will be APS-C compatible!

Another name for the full-frame camera. It offers a wider viewing angle than APS-C.

Be also clear with your expectations vis-à-vis your objective:

An aperture is a small hole in a lens, the size of which can be adjusted to change its effect on the image. A larger aperture increases the amount of light passing through the lens, resulting in a brighter image. However, a larger aperture also results in a shallower depth of field, making it more difficult to focus on a single shot.

For many photographers, the availability of a large aperture lens is always ideal. It is nice to have an option when you want to shoot in low-light situations or at night. Just because a lens has a fast aperture doesn’t mean you have to use it.

For many photographers, this is a major problem in determining whether a lens is good or bad. If you have to change your camera settings because you zoomed the lens, it can quickly become a hassle. But to begin with, variable aperture lenses are by far the least expensive lenses, not the ones that cost thousands of dollars. 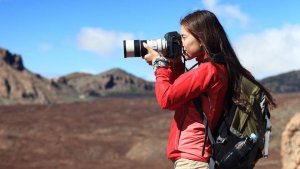 Image stabilization is a feature of the lens that allows the camera to maintain a sharp image even at slow shutter speeds. When shooting hand-held, the camera is constantly moving when the shutter release button is pressed. If the shutter speed is too slow, this movement can cause blurring. With IS (Image Stabilization), however, this movement can be canceled out and the picture will not be blurred.

This does not mean that any shutter speed can be used while using IS, but it does provide a little more freedom than without IS. Image stabilization technology is also found in many camera bodies and lenses. With both, you have an unstoppable and stable Hercules. The better the image stabilization, the more expensive a lens with IS will fetch than one without. IS is also a major factor in determining whether a lens is good or bad, especially since it plays an important role in the lens’ ability to perform in low light.

Light passing through the lens is bent and reshaped to hit the camera’s sensor. Some lenses bend light so much that the image appears distorted. This phenomenon is often seen with wide-angle lenses, where the edges of the frame appear slightly distorted compared to the center. To see this effect, look around the room with the wide-angle lens itself. Notice that the corners and edges of the walls are not perfectly straight. This is due to lens distortion.

There are many lenses in the world, some with minimal distortion. Lens distortion can cause subtle discomfort in a photo and change the impression of the scene. For many photographers, it is desirable to have as little distortion as possible. This allows for more realistic reproduction of the scene.

If you think about it, it would take a lifetime to read and compare different lenses and their degree of distortion. Don’t get too carried away and try to find a lens that has minimal distortion and does not destroy the overall image. If a lens distorts an image slightly, it is not the end of the world.

Chromatic aberration is one of the most important factors that determine the quality of a lens. Each ray of light that enters a camera is composed of a number of colors. As light passes through the glass part of the lens, the camera focuses that light to a single point on the sensor. Some lenses struggle to collect light of all colors, causing certain color regions to be out of focus. The result is colored flare (often cyan or magenta) at the edges of the image.

To get your bearings: the standard focal length

Acquiring an SLR requires knowing the settings of the camera well before leaning on the lens. If you’re a total beginner, there’s no need to invest in a lens right from the start: the standard focal length sold as a kit with your SLR will do just fine. This is most often an 18-55mm lens. It allows you to obtain a very good quality image and introduces you to landscape, portrait, macro photography…

For moving subjects: the telephoto lens 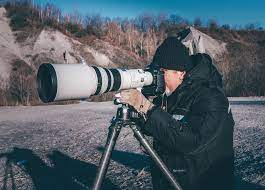 Canon, Nikon, and Sigma regularly offer new models and the choice is very wide. It’s up to you to choose depending on where you want to put the slider in terms of aperture, shutter speed or ease of transport.

Recommended model for beginners: the Tamron AF 70-300 mm, a telephoto lens with dazzling focus and at a very affordable price.

For portrait photography: the portrait lens

Unlike the landscape, the portrait lens is designed to capture detail and emotion. The focal length will therefore be wider: between 50 and 200 mm, in order to obtain a greater depth of field (including the famous bokeh effect, the round blurs in the background). This lens has a large aperture for finer light management.

For landscapes: the wide-angle focal length

If you primarily want to photograph landscapes, streets or buildings, opt for an optic designed to open up a wide field of vision: the wide-angle lens. The image obtained is enlarged compared to your vision with the naked eye, which makes it possible to encompass a larger surface. 10-20mm focal lengths are best for this type of shot.

For versatility: the fixed focal length

Do you want to test different areas without investing in 5 objectives? The 50mm fixed focal length is an excellent investment. Its advantages: compact, efficient, very good sharpness even in low light, very aesthetic bokeh background for portraits… The fixed focal length is used by both professional photographers and beginners. If you do not know which lens to choose in front of the abundance of choices, the focal length to remember is this one! 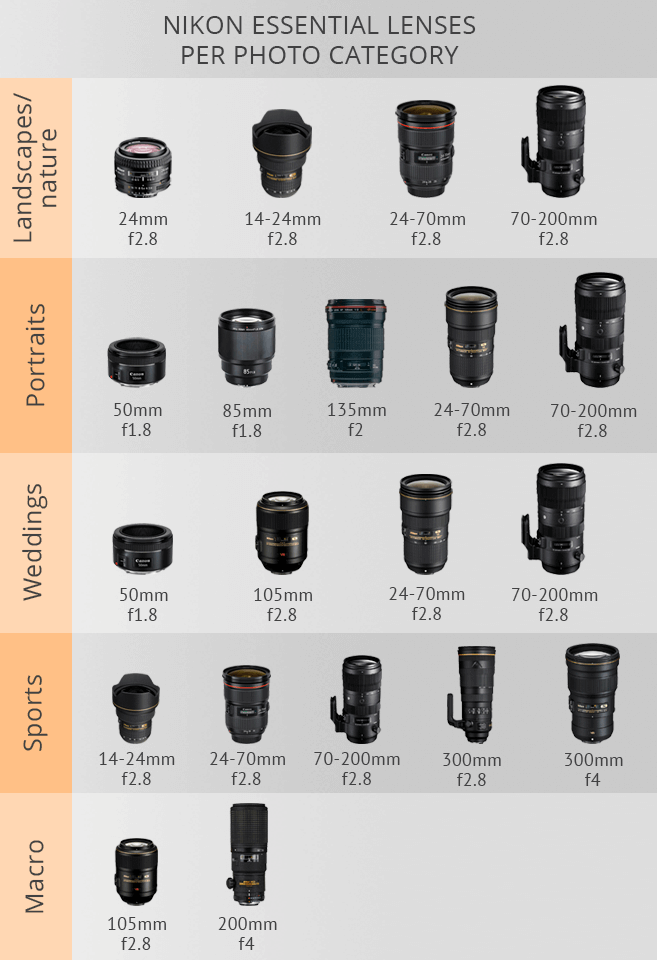 Which photo lens to start with?

If you are buying your first SLR, especially at the entry level, we generally advise you to choose the kit lens, often an 18-55 mm zoom with a variable aperture (f/3.5-5.6 for example). This lens is not to be thrown in the trash and you can take very good photos with it… for starters.

What type of lens to choose?

TO RECAP, HERE’S THE RIGHT THING TO DO TO FIND THE LENS THAT’S RIGHT FOR BEGINNERS: